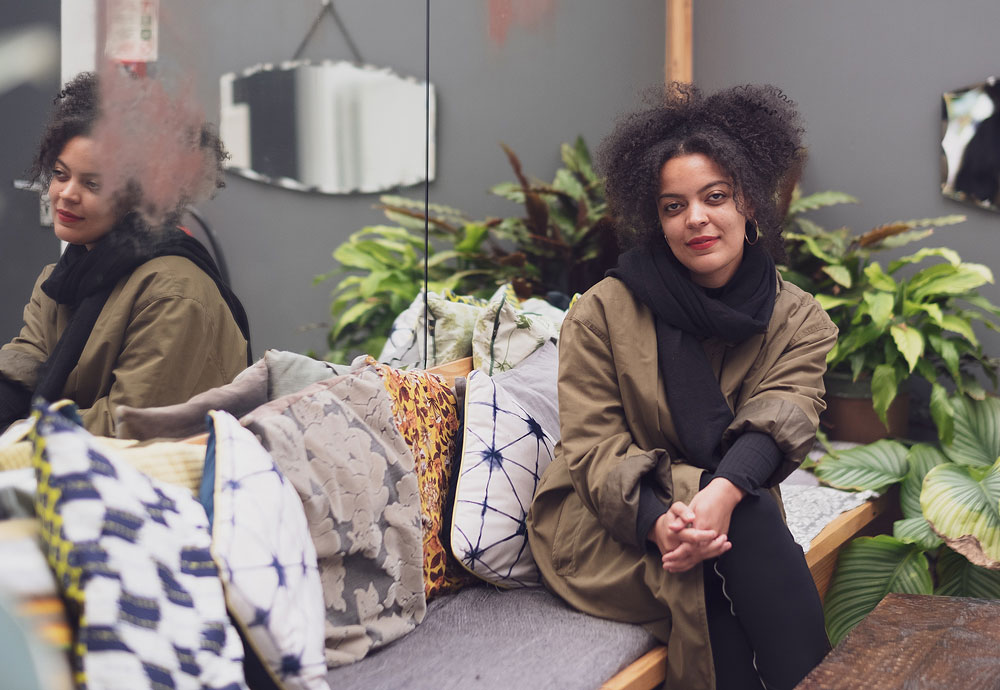 Esther Mogada is a co-founder of Creating a Space, Melt Fashion Collective, and Inspire the Sound. After A-Levels at Newtownbreda High School, Esther studied Fashion & Textiles at Ulster University. She ascribes her love of textiles to her African background and the hands-on, tactile work needed. She’s also comfortable with taking a risk and exploring ideas: “I enjoy not really knowing what the outcome will be but trusting that I’ll get to something, whatever it is, based on what I’m feeling or the artists I’m researching at the time.”

Half-Irish, half-Ugandan, and born in Sudan, she has lived in Belfast, Egypt, and Dublin. Her work spans collaborative projects across events, video production, and fashion. Collectively, they represent Esther’s desire to support people with different outlooks: “All of the people I work with feel like the outsiders, where people are looking at us, and there is a little element of holding yourself back or making your work smaller.”

There is a mixture of challenges, but they all circle back to a particular mindset and a lack of confidence. Lots of people in Belfast aren’t really open to difference so there’s a very conformist attitude. It’s not just about race but even about personal style. At the time I graduated, we were told to move to London if we wanted to be credible. I always hoped to leave here. But I’ve realised that the beauty of Belfast is its place where you can create what you want because it hasn’t necessarily all been done before. The pace of life is slower. It’s cheaper than London. So, from a creative viewpoint, you get the time to build your craft. But, the city needs to recognise that different is good to make ‘more’ possible. We have to find ways to represent difference as part of what is happening here, and to break down the attitude that things need to happen in a certain way.

Belfast needs to be a city that attracts people, where people want to stay, and where people feel like they’re able to do anything they put their minds to if we want it to be more prosperous. We know it’s a reflection of the city’s politics and history, but it feels like we’re stuck in time-warp. It’s slowly beginning to change with my generation, but there are still so many roadblocks to imagining the biggest possible future and declaring ‘I want to create this, no matter how crazy it is’. The biggest of those is a lack of confidence in what we can do. It’s the question that implies ‘who do you think you are?’ or the dismissive statement that says ‘that’s not possible’. And that gets reinforced by so many people leaving for other cities’, which results in a reduced diversity of ideas and an invisibility of difference.

Representation and having effective support systems are really important. Seeing yourself represented can inspire you to step out from what you’re doing to try something new. People don’t realise how powerful representation is! It gives the encouragement in the first instance, but it also helps to show people on a broader city basis that there’s more to Belfast than the obvious.

All three of the companies that I’m involved with are about building representation and supporting people who want to celebrate what’s different: they’re about creating foundations for us and future generations while building on the foundations that are already here. Creating a Space is an events management and video production company. But it’s an umbrella to be able to collaborate with other artists. It means that the projects we deliver closely match our ethos; they somehow share our message of ‘if you’re an outsider, it’s okay’, they advocate for diversity, and they encourage inclusivity and advocate for trusting the process. As a company, we’re trying to spark conversations in Belfast and build a platform for more people to get involved in those conversations. So, we’ve delivered panel talks in partnership with Blick. The first was part of WomenFolk, involving a diverse range of women from the design industry and focusing on people at the start of their career. The second was an all mens panel, talking about masculinity and how that affects your work and so on.

Lots of what I’m involved with has come about because of frustration. But rather than simply wishing it was different, some of us have been entrepreneurial. We’ve responded to opportunities. We’ve gathered like minded people and done something. Melt Fashion Collective, for example, is a group of five designers at the very start of our careers. There was no avenue for us to showcase our work so we decided to do a fashion show. We’ve now delivered three shows. They are as much about delivering a showcase in a different way, we don’t do a traditional runway show, for example, as about focusing on empowering creatives in the industry. It’s us building a support system, not just for people in fashion, but people who want to express themselves ‘differently’ from the traditional ways. Eventually, the big dream is to have a space that would house this activity, house the events, house designers, even do some of the production there.

A successful Belfast will be when different approaches are seen as a good thing. It will be when the diversity of what’s really happening in the city is effectively represented and communicated. The more we can represent ourselves, that will be an avenue to change mindsets. It’s not about saying different is good for the sake of different, but simply about the city recognising and supporting how the city’s story is changing and needs to keep changing. Belfast is my home. My experience of here is very positive. I want to be a part of what’s happening in my home and for my work to help support that change in mindset. Ultimately, I believe that a successful Belfast will be when we can dream big, and take ownership of it without feeling guilty. That’s something I’d like to help make happen.