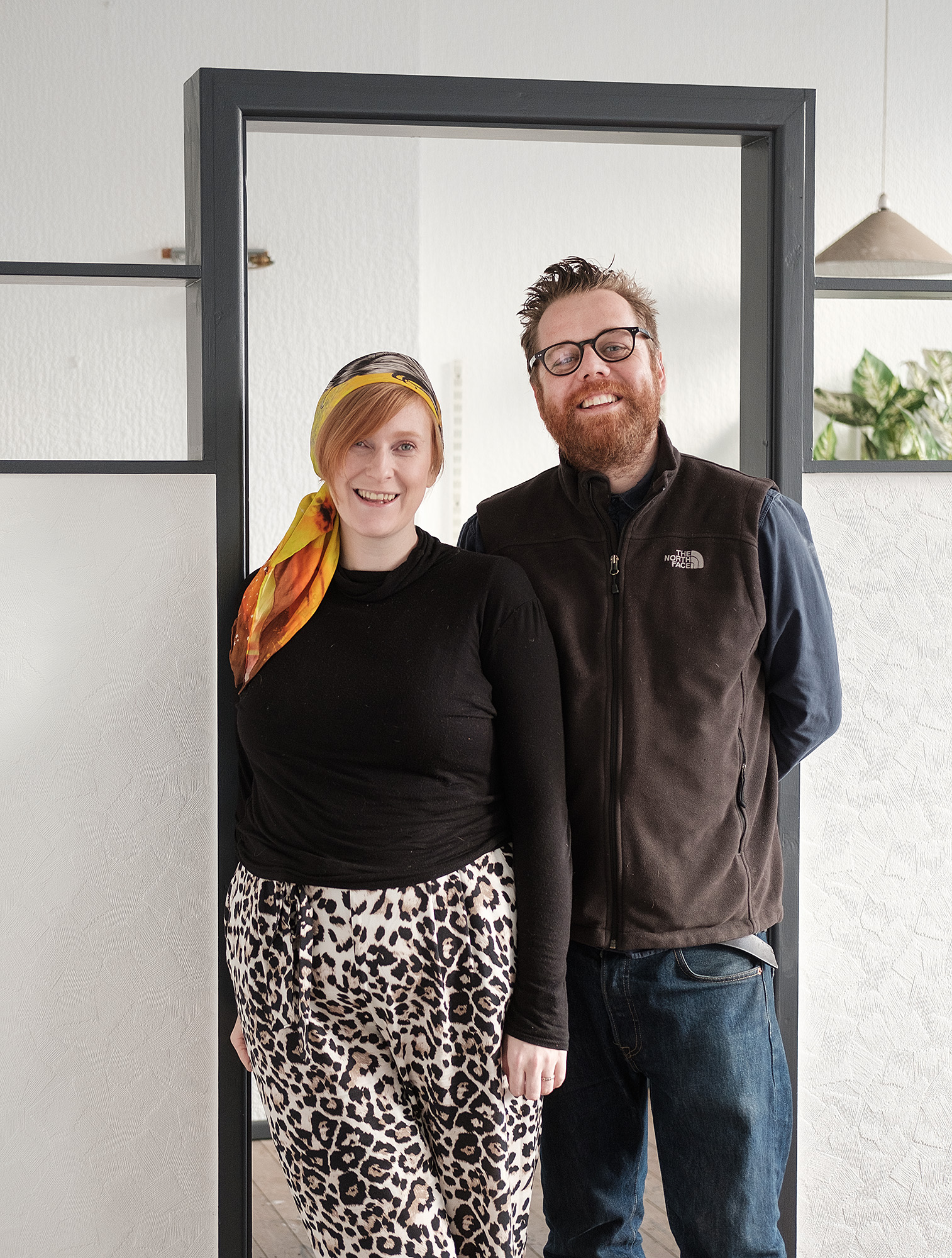 Barbara and John-Paul Whearty are originally one-half Belfast and one-half Dublin. Barbara is “born and bred” Belfast with a few years of roaming to foreign lands; John-Paul moved to Belfast in 2010 on the offer of a job in film production. For Barbara, it was a case of not feeling at home anywhere else. For John-Paul: “I’m a blow-in. I ended up here by accident. I was coming here to get away from life and find a new adventure.”

They recently opened Cafe Cuan as the first phase of redeveloping a historic building. They aim to challenge a few Belfast shibboleths along the way. Part of that is about demonstrating that change comes from doing, not just from complaining. And another is saying that the city needs to focus on quality: “if you’re going to strive to be the best at anything, then you have to have the best of everything. That doesn’t mean expensive. It means thinking differently about your solutions.”

What is the challenge you’re working to address in Belfast?
A couple, really. One is that there are two Belfasts: the establishment narrative, and the real story of a gritty city. Too many people have become disconnected from Belfast’s soul, especially the powers that be. Belfast is becoming like so many other cities. We’ve got economic regeneration, but it’s homogenised regeneration. Another is that there’s a wild lot of complacency in Belfast. It’s not enough to say, ‘oh, that’s the way we always do it’. We want our colleagues to feel valued, to live and not just subsist, but there’s a cultural acceptance of doing the bare minimum. We’d rather go out of business by paying someone a wage that they can live on for three years than make money from exploiting somebody.

And people think it’s easier to knock an old building down than nurture it back to life. The reality is, our building is over 100 years old and is more solid than anything being built now. It sits on the fringe of an ‘urban village’ zone. In Belfast that means a preference to knock down what’s there and replace it with something shiny. But that’s not how you build a village, a community. You build a village by having shopkeepers and banks and a post office and that’s what we want to try and do here. The vision for using and reusing what we’ve got and for putting people at the heart of the city just doesn’t exist in places where it should. We hand design over to technical professionals, but a part of the process of creating places is people!

How are you thinking and doing differently?
We want to show that there’s a way to commercially redevelop older buildings, with a community focus and quality jobs: it’s about the value added to the local community and to the city. We’re trying to build a place that we enjoy and that our neighbours enjoy. Thousands of people pass here every day, but nobody knew what to do with these buildings. They’re just as important as any of the marquee historic buildings in Belfast; they tell a story, they’re part of a neighbourhood. What we’re doing speaks to the people who originally built Belfast. They were all business owners, they were independent, they were creative people. They had a vision for the city and got together and put their resources together to make that happen.

It just screamed out to us as a place for people to come into. Belfast needs places for people to come in and just talk to each other. We complain a lot and we’ve been criticised for that in the past, but all the time we were looking for a building where we could invite people in and put the kettle on, ‘cos that’s our culture, isn’t it?

This building is our community: we live just up the road. We’re both great believers in timing and this opportunity just came along at the right time. We want to help rebuild a village in this area, and show people that it can be done. We haven’t spent a huge amount of money; it’s everything we have and people tell us that we’re mad, but we believe in it, and you can be savvy about it. We’re starting with the coffee shop and then shortly the kitchen. Two floors above will be a creative co-working space, with a special rate for early-adopter creatives. It’s about trying to encourage collaboration and a new way of working in the city, shaped around a strong digital infrastructure. The top floor used to be a dance hall, The Cromac, it still has a sprung floor; ultimately we’re working for it to be a postproduction suite for TV and film. Altogether, it’s about making the building sustainable and providing benefit to the local area.

What will make a successful Belfast for you?
It will be a city that’s fair. If we don’t create and shape a society that’s fair, then we’re going to repeat the problems of the past. We’re promoting big multi-national companies but not promoting the small-scale enterprising businesses in the same way. But, we need to allow people to develop their own ideas in places where they feel valued. If you create a fair society, people want to contribute. We need to encourage other people to get involved, to do whatever they can do to make a difference. We have to think in terms of villages, but real villages, not institutionalised ones. And every village has a soul. Belfast is a city of villages, so let’s use those souls.

In old buildings, just like in cities, you have to work with what you find. It might be an inconvenience, but it’s where the value is. Belfast’s soul is the resilience of its people. We sometimes forget about our resilience, but it’s where our dark humour comes from, and if anything defines Belfast, it’s the dark humour of its people: you come to Belfast and the first person you meet slags you, and that’s it, you’re in. In an attempt to become ‘hip and cool’, we’re forgetting that we are a place with its own flavour. For example, the independent shops like Fresh Garbage, Good Vibrations, American Madness, all represented underground aspects of the social life of the city. There was lots of hidden creativity in the city and we forget about that in an attempt to ‘catch-up’ with other places and to patch over what was an incredibly difficult time in our history. A successful Belfast will be one that grabs that authentic identity and declares ‘This is who we are!’