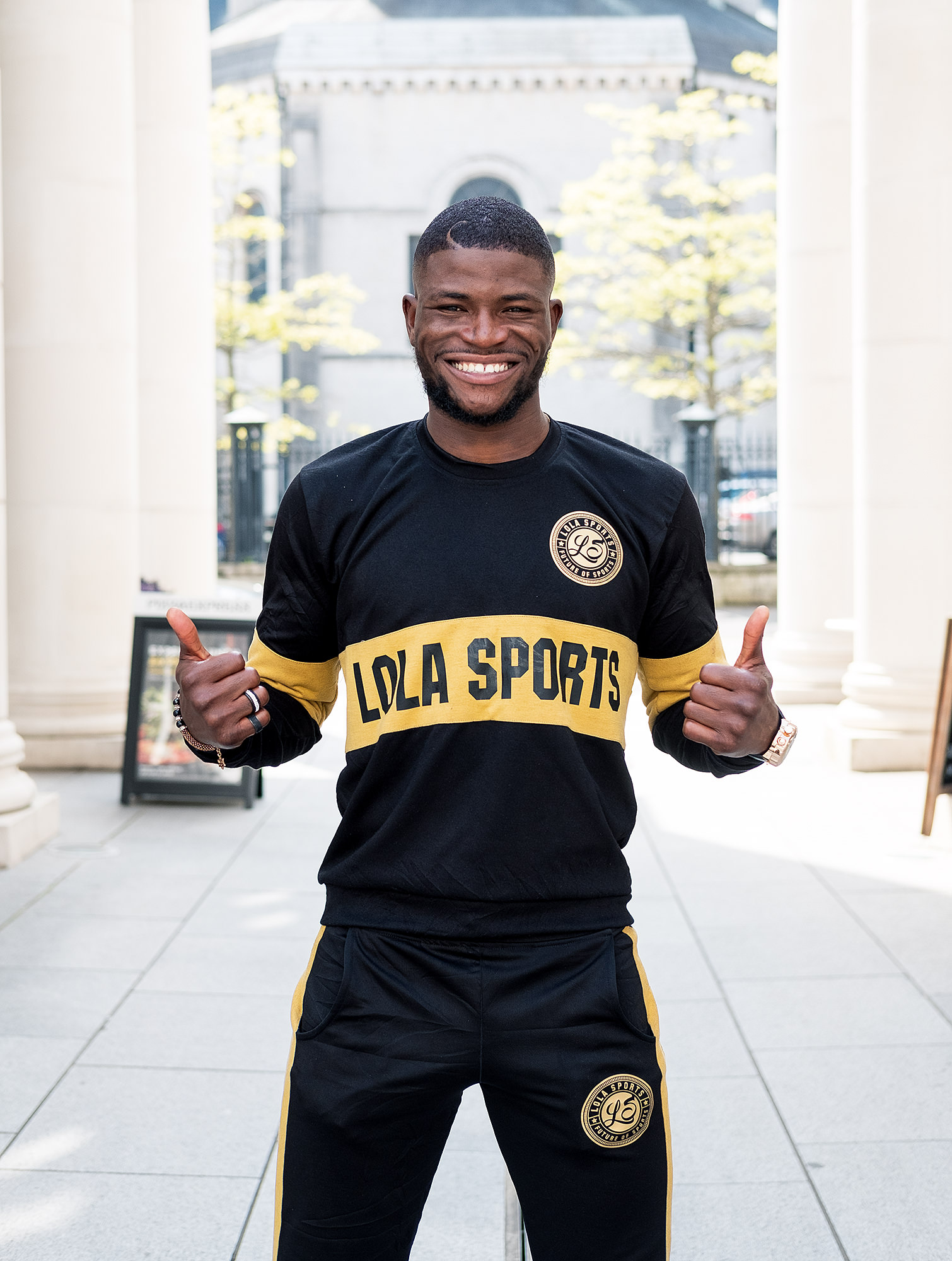 Abiola Sanusi, or Abby to most people, is the founder of Lola Sports. It supports early-career athletes to showcase their skills in front of international coaches and scouts. Abi was born in Nigeria and grew up in Dublin but Belfast has been home for the last four years. “Belfast is a beautiful, beautiful place. I had an option to go back to Miami, but there’s so much opportunity in Belfast and I really wanted to do something here.”

Having played football with Shamrock Rovers, Carrick Rangers, Dungannon Swifts, and Miami Dade FC, it was his experience in Miami which led him to think about the possibilities of being more than just a player. “Football’s always been my thing. I didn’t know anything else.”

Belfast has enormous potential. It has a vibe that something is happening. But there are things that we need to work at to make sure that the change is real for people. One of those is connecting people who are new to Belfast with what the city’s opportunities are. Diversity is growing in Belfast, but there isn’t a whole lot of diversity in football. There’s a problem with getting people from different backgrounds involved. And that highlights the other challenge: we’re too happy to accept this notion that there’s a certain way of doing things. The status quo approach gets repeated again and again. All that means, though, is that we limit our ambitions and we don’t try new approaches. We can do a lot more.

I’m pretty outspoken. I believe that we should try new things to build diversity in local football as well as encouraging more ambition. Lola Sports is a platform that helps both athletes and local teams by bringing new voices to sport here. Those new voices do two things. One, they help challenge complacent approaches and, two, they demonstrate how diversity is a good thing. I really believe that teams here need to believe that they can achieve more! Regular participation in the Europa League can be the norm. But that means changing mindsets. It means adopting different approaches, including players taking ownership of their training and lifestyle choices. Part of what makes Belfast such a fun city is our sociable approach, but that shouldn’t come at the expense of a dedicated and professional approach. Being a professional isn’t about being paid thousands of pounds per game: it’s about your mindset, how your lifestyle affects your training.

It’s also about introducing new ideas. For example, we’re including footvolley as part of our set-up. It’s a combination of football and volleyball that’s really popular in Brazil. I used it a lot in my training while I was in the US, and it just brings a completely different way of handling the ball and thinking about how you play the game.

The main focus of our work comes with the summer showcases. We bring players from all over the world to Belfast to play in front of scouts and agencies. We do focused training with them, data analysis, language teaching, and they play matches against Irish League opponents, all while they get to experience the city. My approach is to encourage people to keep trying what they’re naturally good at, not force them to play in a certain way because that’s what I think is right. It’s about skills development and personal development, not doing something by a template.

A successful Belfast will be when we open our minds more to what the city’s possibilities are. We also need to listen to what young people are saying, and people from different backgrounds. The city needs to find ways to involve people with different experiences and change the mindset of what success is. Instead of craving security and stability, we need to recognise that you need to make mistakes in life to grow. A really successful Belfast will be when people are allowed to express themselves more. And when we have a full-time professional team in the Europa League!